Disclaimer: The opinions stated in this blog are my own and do not necessarily reflect your opinions. The opinions stated about opinions does not in any way indicate that the author does not believe in Truth, either. So, should you get antsy, frustrated, or angry about this please remember that this is my opinion and I have the right to be wrong about it. Thank you.

There is no shortage of opinions in the Body of Christ. Yes, you read that correctly, I said ‘opinions.’ I know that these are things that God told you. I know that you are ‘strongly’ led of the Lord to say the things that you must say. But, since it is just you and God on this one, I will have to say it is an opinion. 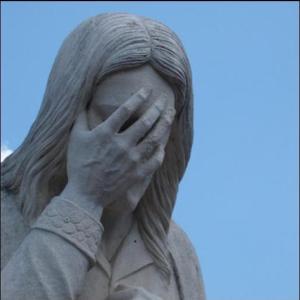 If I could see Jesus standing next to you while you tell me what he told you to say, he would probably be standing there with shrugged shoulders and that look that says, “I have no clue what she is talking about.” Or, “I never said that.” He might even be twirling his index finger toward his temple and mouthing the words, “He’s crazy” as you tell me what God told you to say or do.

We are not lacking in ideas of what type of government, fiscal policies, or social standards Jesus would endorse or pursue. There are some really authoritative voices that feed the frenzy. They are passionate and confident and use their Bibles to prove their points. All the while Jesus is standing over in the corner kicking around some sand and telling Gabriel, “I wish they would quit talking about me and start talking to me.” Gabriel just nods in agreement. Really, what can he add?

Well, Gabriel did mention that he was kind of tight with a couple of the angels of the apocalypse and that he could tell them to go early. That is followed by a stern look, a nervous chuckle, and an awkward silence.

I learned a long time ago the difference between facts and opinions.

There are educated opinions and uneducated opinions but they are all still opinions. Some opinions are better than others. We recognize that instinctively. If you agree with my opinion, you recognize good thinking. If you disagree with me, you are immature and uneducated in your thinking. Worse yet, we dismiss conflicting opinions out of hand without even discussing them or discovering why the other person came to their conclusions and opinions.

Of course, this is just my opinion. What’s yours?

2 thoughts on “An opinion about opinions.”

© [David Gerber] [2013-14] All Rights Reserved No part of this website or any of its contents may be reproduced, copied, modified or adapted, without the prior written consent of the author, unless otherwise indicated for stand-alone materials.
Loading Comments...
%d bloggers like this: